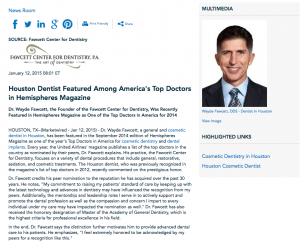 Dr. Wayde Fawcett, the founder of the Fawcett Center for Dentistry, was recently featured in Hemispheres Magazine as one of the Top Doctors in America for 2014.

Houston, TX – Dr. Wayde Fawcett, a general and cosmetic dentist in Houston, has been featured in the September 2014 edition of Hemispheres Magazine as one of the year’s Top Doctors in America for cosmetic dentistry and dental implants. Every year, the United Airlines’ magazine publishes a list of the top doctors in the country as nominated by their peers, Dr. Fawcett explains. His practice, the Fawcett Center for Dentistry, focuses on a variety of dental procedures that include general, restorative, sedation, and cosmetic treatments. The Houston dentist, who was previously recognized in the magazine’s list of top doctors in 2012, recently commented on the prestigious honor.

Dr. Fawcett credits his peer nomination to the reputation he has acquired over the past 30 years. He notes, “My commitment to raising my patients’ standard of care by keeping up with the latest technology and advances in dentistry may have influenced the recognition from my peers. Additionally, the mentorship and leadership roles I serve in to actively support and promote the dental profession as well as the compassion and concern I impart to every individual under my care may have impacted the nomination as well.” Dr. Fawcett has also received the honorary designation of Master of the Academy of General Dentistry, which is the highest criteria for professional excellence in his field.

In the end, Dr. Fawcett says the distinction further motivates him to provide advanced dental care to his patients. He emphasizes, “I feel extremely honored to be acknowledged by my peers for a recognition like this.”

Dr. Fawcett is a graduate of the University of Texas Dental School and has 30 years of experience providing dental care to patients in the Houston, Texas area. He is a member of the American Academy of Cosmetic Dentists, Texas Dental Association, and the American Dental Association, among other prestigious dental organizations. Dr. Fawcett is available for interview upon request.

The practice can be reached online at DrFawcett.com and facebook.com/pages/Fawcett-Center-for-Dentistry-Wayde-Fawcett-DDS/198986310231889.