What Is Sleep Apnea?

Sleep apnea is a condition in which an individual’s breathing is interrupted (stops and starts) while sleeping. When discussing sleep apnea and related snoring, it is important to understand that there are different types of sleep apnea with varying causes. These include obstructive sleep apnea, central sleep apnea, and complex sleep apnea—each of which is highlighted below.

Studies show at least one third of the population over the age of fifteen is at risk for developing obstructive sleep apnea (OSA), a condition that causes afflicted individuals to stop breathing repeatedly throughout the night as they sleep. With obstructive sleep apnea, breathing is interrupted by the soft tissues of the throat and mouth. It is considered a serious health problem that can lead to severe and even fatal health complications if untreated. The key to successful treatment of OSA is keeping patients’ airways open and unobstructed throughout the night. Considered one of the top dentists in Houston, Wayde Fawcett, DDS offers several options for treatment of OSA that can help reduce or even eliminate symptoms of the condition.

While upper airway resistance syndrome is not technically a type of sleep apnea, it is a somewhat common type of sleep disorder that hinders proper breathing. Similar to OSA, UARS is caused by the relaxation of soft tissue in the airways. The subtleties of UARS are such that many cases are either misdiagnosed or undiagnosed, making it important to have physician who can perform thorough testing. This condition is prevalent among women (commonly related to menopause), teenage girls, and slender young people. Men with UARS tend to be older and larger in size. Both CPAP and custom oral appliances can be helpful in treating this condition during sleep.

If you are concerned that you are suffering from disordered breathing while you sleep, it is imperative that you undergo a sleep study to determine the cause of your condition. With a proper diagnosis you can receive the appropriate treatment from the right health professional.

The most common symptom of obstructive sleep apnea is loud snoring. While not all snoring indicates sleep apnea, snoring is caused by vibration of the soft palate, which results from restricted airways while sleeping. Most often, the relaxed position of the tongue and throat during sleep is responsible for limiting the passage of air.

What Are the Symptoms Sleep Apnea?

When airways become fully obstructed by the soft tissues and breathing is interrupted for a period of time, serious disturbances to sleep patterns and blood oxygenation levels can occur. As the brain becomes progressively deprived of oxygen, it eventually sends a signal to the body to immediately unblock the airway. Typically, the individual will snort or gasp in response, temporarily alleviating the blockage and restoring more adequate airflow. In many cases, pauses in breathing can last 10 seconds and even much longer. When this cycle repeats throughout the night, the condition is diagnosed as obstructive sleep apnea.

What Are the Risks and Side Effects of Sleep Apnea?

In addition to the symptoms of obstructive sleep apnea that are discussed above, there are many side effects and serious health risks associated with untreated OSA. Health complications caused or worsened by sleep apnea can include:

What Are My Sleep Apnea Treatment Options?

Obstructive sleep apnea and UARS are treatable conditions; however, standard treatment methods, like the CPAP (constant positive airway pressure) machine, can be disruptive and cumbersome when trying to sleep. At our practice, Dr. Fawcett offers alternative methods of oral treatment, which are typically better tolerated. With effective oral treatment, the symptoms and health problems associated with OSA/UARS can be reduced and, in some cases, entirely eliminated. At the Fawcett Center for Dentistry, P.A., we offer the following options for treatment of OSA and UARS: 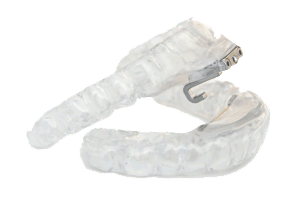 The Thornton Adjustable Positioner®, or TAP® device, is an oral device designed to be worn during sleep. The TAP® device can maintain proper jaw positioning to clear soft tissue obstruction and facilitate optimal breathing. During wear, the adjustable TAP® appliance can prevent the lower jaw from falling open, which keeps the airway clear. Patients who are candidates for this effective method of treatment can experience a reduction in both snoring and symptoms related to OSA/UARS, often eliminating the need for surgery or bothersome treatment systems. The custom appliance is similar to a bite guard and patients generally report the device as being comfortable and easy to wear.

Are There Different Degrees of Sleep Apnea?

Sleep apnea can be experienced at varying degrees, the severity of which is determined through a precise medical evaluation. This type of sleep assessment identifies your oxygen desaturation levels, respiratory disturbances, and classification on the apnea hypopnea index (AHI). The number of breathing pauses you experience per hour correlates to the AHI scale and categorizes your sleep apnea as either mild, moderate, or severe:

Between 15 breathing interruptions and 30 breathing pauses per hour is classified as moderate sleep apnea according to the AHI.

Individuals with severe sleep apnea register 30 or more breathing interruptions per hour on the AHI.

The severity and characteristics of your sleep apnea will play a direct role in the methods that are appropriate for treating your condition and improving your health. An experienced doctor is tasked with interpreting the data collected during your sleep study to deliver the proper diagnosis.

Can Children Have Sleep Apnea?

If you are concerned that your child may be suffering from pediatric sleep apnea, it is very important that he or she is evaluated by an experienced physician as soon as possible. With a proper diagnosis, the right treatment steps can be taken to prevent further complications and improve overall health.

For more information about obstructive sleep apnea and the effective treatments we offer, please contact our practice to schedule an appointment.